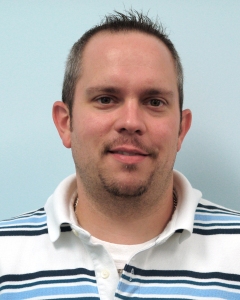 Todd Savini began working for Online Stores on July 1,2007. Prior to that, he worked at Spreadshirt in the customer service department, as well as at a hotel as a night auditor. He originally applied at Online Stores to work as a customer service representative due to his past experience, but was brought in to work with flagpole sales. Today, Todd is working as a Purchasing Agent. He manages thousands of items in the United States Flag Store all while attempting to keep a balance between COGS and the customer service department. He also strives to make sure that OLS receives the respect it deserves from its vendors. Todd places his recognition as employee of the month as his fondest memory of working here at Online Stores.

When he isn’t working, Todd enjoys spending time with his soulmate, Amy. The couple met here at Online Stores, and has been living together since. Amy’s 6 year old son Logan also lives with the couple. Todd enjoys playing Lego’s and swimming with Logan, as well as picking on Amy. Todd loves spending time with Amy and Logan, enjoying his life as much as he can. The couple also owns several pets. Todd describes their dog, Nikki, as basically being his daughter. They also have two cats, Sam and Max. Max stalks Amy while she gets dressed and Sam bites Todd for attention.

Todd attended WCCC and UPG studying biochemistry and education, but claims to have been too interested in extracurricular activities to continue going. He finished three years of his degree before leaving. In the next 10 years, Todd hopes to sneak away to Vegas to marry Amy, finish working on their house together, hit the lottery, and continue to work hard at everything he does. He would also like everyone to know that he is not as mean as he appears, and that everyone should live life to the fullest, because you never know what tomorrow brings.

Thanks for all of the hard work Todd, and congratulations on being named September’s OLS Employee of the Month!

View all posts by Online Stores